Deeply humbled by this generous review of my new paper, Congressional Securities Trading, by Prof. Stephen Bainbridge (UCLA), one of the deans of corporate law scholarship.

The Business Scholarship Podcast is running a series of interviews on the COVID-19 crisis.

In Episode 4, JW Verret (GW Law) and I joined host Andrew Jennings (Stanford Law) to discuss allegations of congressional insider trading on the pandemic, including my Congressional Securities Trading piece.

In Episode 1, I serve as a co-host, interviewing recognized authority on transit and transportation funding Yonah Freemark (MIT urban planning) to discuss the transit funding crisis.

Both episodes, along with the rest of the special series, may be accessed here.

In early March 2020, back when such things were still possible, I sat down with transportation journalist and urban planner Jeff Wood in San Francisco to record a live show at Manny’s in the Mission, hosted by two impressive local organizations (Urban Environmentalists and YIMBY Action). The podcast recording and (abridged) transcript are now available here!

In March 2020, it was revealed that several U.S. Senators had cashed in their stocks after receiving intelligence on COVID-19, sparking both outrage and renewed interest in congressional insider trading. The pandemic trades exposed gaps not only in current law, but in scholarship and leading reform proposals. Congressional securities trading (CST) generates unique challenges, such as the risk of policy distortion, as well as more prosaic ones, like the management of benign trading by insiders. The current framework—which centers fiduciary regulation of theft—is poorly matched to both types. Surprisingly, rules from a related context have been overlooked.

Drawing on SEC regulations that govern public company insiders, this Essay proposes a taxonomy of CST, situates the Senators’ conduct within it, and develops a novel, comprehensive prescription to manage it. Like Members of Congress, corporate insiders such as CEOs engage in securities trading despite possessing valuable inside information. The system designed to manage these trades provides a model. Specifically, Rule 10b5-1 plans (which disclose trades ex ante) and the short-swing profits rule of Section 16(b) (which disgorges illicit profits ex post) should be adapted to the congressional context. Both devices emphasize the management of legitimate trades rather than the punishment of criminal ones (which is already accomplished by other rules).

Rules like these would address policy distortion and unjust self-enrichment by Members of Congress. To reduce those risks further, lawmakers should also be restricted from owning any securities other than U.S. index funds and Treasuries. None of these rules would require new legislation or regulation; all can be adopted by chamber rule. A third risk—the unjust enrichment of third parties—is often conflated with the others, but presents distinct tradeoffs and should be taken up separately. SEC rules provide useful precedent here as well.

Link to full paper: here. Table of Contents below. 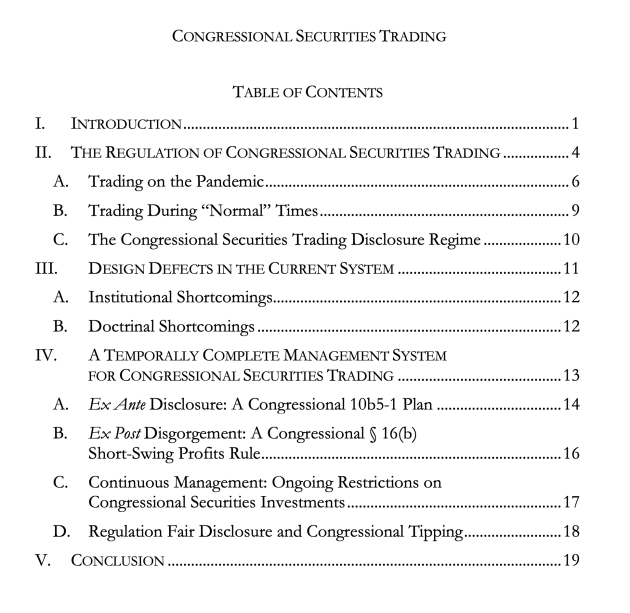 The Independent Board as Shield, 77 Wash. & Lee L. Rev. __ (forthcoming 2020), examines the law’s continued, pervasive reliance on independent corporate directors to supervise managers despite many known problems with that model. Many thanks to those who provided comments on earlier drafts; additional feedback is welcome. The abstract and TOC appear below.

The Independent Board as Shield

CEOs and directors are barred by the fiduciary duty of loyalty from managing companies for personal gain. Yet a pair of modern corporate law staples—the independent board and the business judgment rule—overwrites this command, enabling conduct that amounts to self-dealing. Jointly, these devices shield such acts. But the business judgment rule was designed as a shield. What’s curious is that the independent board, ostensibly a pro-shareholder innovation, functions as one, too.

U.S. public companies are overseen by boards composed of outside directors whose raison d’être is to represent shareholder interests and constrain CEOs. The effectiveness of these directors is sharply limited, however. Thus, while the independent board empowers shareholders, it also empowers CEOs. Nowhere is this subtle duality more consequential than in independent directors’ role in voting on whether to authorize transactions that benefit the CEO.

The business judgment rule, which insulates board decisions from review, extends the independent board’s role beyond authorization of such transactions to immunization. The rule is commonly justified as giving legal effect to the comparative advantage of businesspeople in their domain, for example in deciding how many widgets to produce. But independent directors can opt to extend its protection beyond this narrow, unobjectionable category of duty of care cases to acts that squarely implicate the duty of loyalty. The result is a shield for conflicts of interest, with adverse consequences for shareholders and the legitimacy of markets.

This Article proposes to eliminate the independent board’s paradoxical shield quality by ending business judgment rule protection for claims implicating the duty of loyalty. The clearest rationale for this prescription comes from the logic of the rule itself: comparative advantage. Judges, not businesspeople, are best situated to assess conflicts of interest. More broadly, the Article’s analysis suggests that the pro-shareholder reputation of independence is overstated and may have inadvertently fostered a sense of complacency around board power.

I’m delighted to share that my latest article, Should Law Subsidize Driving?, will be published in the New York University Law Review. The abstract appears below. I’m very grateful for the comments I’ve received to date, and welcome additional feedback.

A century ago, captains of industry and their allies in government launched a social experiment in urban America: the abandonment of mass transit in favor of a new personal technology, the private automobile. Decades of public and private investment in this shift have created a car-centric landscape with Dickensian consequences.

In the United States, motor vehicles are now the leading killer of children and the top producers of greenhouse gases. They rack up trillions of dollars in direct and indirect costs annually, and the most vulnerable—children, the poor, and people of color or with disabilities—pay the steepest price. The appeal of cars’ convenience and the lack of meaningful alternatives has created a public health catastrophe.

Many of the automobile’s social costs originate in the individual preferences of consumers, but an overlooked amount is encouraged—indeed enforced—by law. Yes, the U.S. is car-dependent by choice. But it is also car-dependent by law.

This Article conceptualizes this problem, and offers a way out. It begins by identifying a submerged, disconnected system of rules that furnish indirect yet extravagant subsidies to driving. These subsidies lower the price of driving by comprehensively reassigning its costs to non-drivers and society at large. They are found in every field of law, from traffic law to land use regulation to tax, tort, and environmental law. Law’s role is not primary, and at times it is even constructive. But where it is destructive, it is uniquely so: law not only inflames a public health emergency but legitimizes it, extending its longevity.

The Article urges a teardown of this regime. It also calls for a basic reorientation of relevant law towards consensus social priorities, such as health, prosperity, and equity.